If you’re a fan of Andrea Cremer’s Nightshade trilogy, you probably already know that a prequel, Rift, is on its way.  I’m happy to announce that we now have a cover for what is sure to be an amazing book.  (Thanks to the folks at MTV’s Hollywood Crush for the announcement!)

According to MTV’s cover release, the story will focus on how the war between the Searchers and the Keepers began (the Witches’ War), and the heroine of the tale is a fierce girl named Ember. There will be nods to events in the Nightshade trilogy (Nightshade, Wolfsbane, and Bloodrose), so true fans will have fun connecting events (and even characters?) in Rift to the stories we already know and love.

If you’re a fan of James Dashner’s Maze Runner series, you probably know that a prequel is on the way.  The Kill Order, which tells the story of how sun flares scorched the earth and society fell to disease, will be released on August 14th.  Check out the official cover below: 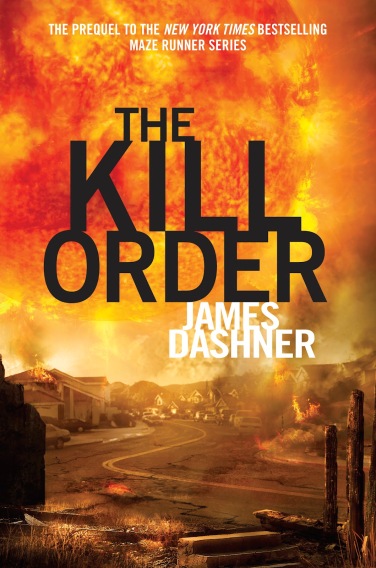 I think it’s awesome, and I can’t wait to read about the events that led to the creation of WICKED and the dreaded maze. If you haven’t read the Maze Runner series already–The Maze Runner, The Scorch Trials, and The Death Cure–I definitely encourage you to do so. It’s a great series and is perfect for those Hunger Games fans who are looking for a dystopian story from a guy’s perspective.  For more information, visit James Dashner’s website at http://www.jamesdashner.com/.