This time last year, I had the opportunity to read a hilariously funny book from the team of Jory John, Mac Barnett, and Kevin Cornell. That book was The Terrible Two. As soon as the book was released, it earned a place on my library shelves, and, to be honest, I haven’t seen it since. (My students know a good book when they see one.)

Now, almost a year later, I’ve been lucky enough to read the sequel to The Terrible Two, aptly named The Terrible Two Get Worse. (Thank you, NetGalley!) This second installment will be released a month from tomorrow, and, just like its predecessor, it will be added to my school library as soon as I can manage it.

I must confess that I liked the first book in this series more than the second, but the sequel still managed to keep me chuckling and eager to turn the page. It’s a quick read that will definitely appeal to any budding pranksters or anyone who enjoys a good laugh. 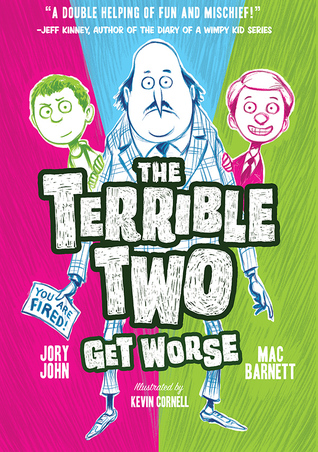 Miles and Niles make up the Terrible Two, the most excellent pranking team Yawnee Valley has ever seen. Their legendary pranks are sure to be recorded in the history books of the International Order of Disorder, especially since their primary target is Principal Barry Barkin (and his insufferable bully of a son, Josh).

Unfortunately for Miles and Niles–and Principal Barkin–the pranking has come to the attention of the school board. They wonder if Principal Barkin has what it takes to run the school if he can’t figure out who’s pulling so many pranks and bring them to justice. It doesn’t help that the former principal, who happens to be Barry Barkin’s father, agrees with the school board and decides to take matters into his own hands.

Now, Miles and Niles have to contend with a new leader in their school, Principal Bertrand Barkin, and this guy is not messing around. He vows to put an end to pranks…once and for all.

At first, the Terrible Two figure they can get something over on this new guy, but the elder Barkin proves to be one tough customer. He simply doesn’t react to any of their pranks, and what good is a prank without a reaction?! Pretty soon, pranks are a thing of the past at the Yawnee Valley Science and Letters Academy, and Miles and Niles simply don’t know what to do with themselves. Something’s gotta give, right?

The Terrible Two eventually figure out what they must do to end Bertrand Barkin’s reign of terror…but they’ll need some help. That help, though, may have to come from an unexpected source. Could Miles and Niles possibly–*gasp*–join forces with their former principal, one Barry Barkin, to prank someone who is virtually unprankable? Find out when you read The Terrible Two Get Worse!

As with The Terrible Two, this second book is a perfect book for any reader with a bit of a mischievous side. The text and illustrations mesh perfectly, and the book also emphasizes such important concepts as creativity, teamwork, perseverance, and friendship.

I would say that The Terrible Two Get Worse is highly recommended for any collection that serves readers from 4th grade on up. Some of the humor resonates more with older readers than with kids, but there’s definitely something here for everyone. I, for one, am hoping that we’ll see even more Terrible Two stories in the future.

For more information about this awesome series and its creators, check out the websites of Jory John, Mac Barnett, and Kevin Cornell. And make sure to pick up your copy of The Terrible Two Get Worse on January 12th!