I’m one step closer to the end of Danielle Paige’s Dorothy Must Die series. I’ve just finished the final prequel novella, The Queen of Oz, and I’ll soon start reading the final full-length novel, The End of Oz. If you haven’t read all of the stories up to this point, you may want to turn back until you’ve caught up.

(While it’s not absolutely necessary to read all of the prequel novellas to get what’s going on in the novels, it does help tremendously. They add tons of context to what’s happening in Oz.)

Here are all of the stories in this series thus far:

Now let’s move on to The Queen of Oz… 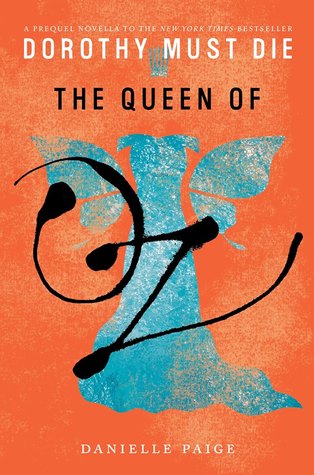 In this final novella, we learn more about Mombi’s origins and her connection to Ozma, the rightful ruler of Oz. Mombi wasn’t always the powerful witch we’ve come to know throughout the course of this series. As a matter of fact, she didn’t have much power at all…at first.

While a young witch, Mombi asks Glinda (who is actually quite horrible) to teach her everything she knows, but it doesn’t take long for Mombi to realize that Glinda isn’t about to teach anyone to be as powerful as she is. So Mombi strikes out on her own, and she’s soon given a very important task by Lurline, the fairy who founded Oz.

One day, a visitor arrives at Mombi’s home deep in the woods. It’s the Wizard, and he’s carrying a peculiar little bundle. He claims that the baby in his arms is his niece, and he charges Mombi with protecting the child until he can return for her.

Thanks to a dream encounter with Lurline, Mombi knows the truth about this child and has been preparing for the task before her. She knows this child is Ozma, the true heir to the throne of Oz, and it’s up to Mombi to protect her. There’s only one thing to do. She must use all the magic she’s learned to transform Ozma into something–no, someone–else. She doesn’t plan on Pete, though.

Pete has spent his entire life sequestered with Mombi. The old witch doesn’t seem to like him very much, but she’s still oddly protective of him. Pete does what he can to find momentary reprieve from his life with Mombi, and he dreams of a life of excitement and adventure. Eventually, those dreams and an encounter with an intriguing Munchkin drive Pete to find the Wizard in the hopes of being completely free of Mombi and her magic.

Pete couldn’t know, however, that someone was watching for him…someone far more dangerous than Mombi. Someone whose name rhymes with Blinda who wants to unlock the magic within Pete for her own nefarious purposes. With Glinda’s “help,” Ozma is finally returned to Oz, but she may not be quite as easy to control as the “Good Witch” would hope.

I’ve given way too much away here, and I apologize for that. There’s still a good bit to the story, so read for yourself to uncover the rest. Also, if you didn’t already know the connection between Ozma and Pete, you really have a lot of reading to do.

I’ll soon turn my attention to The End of Oz, the final installment in the Dorothy Must Die series. I have a few other books to finish first, but I’m hoping to get to this book by the end of April. Part of me is putting it off so that I can keep my enjoyment of the series going as long as possible. Another part really wants to see how things play out, especially as it concerns Glinda and Dorothy getting what’s coming to them. Stick with me here, and I’ll post my thoughts as soon as I finish the last book in this gripping series.